3 Ways to Get The Most Out of Facebook Ads

Facebook ads take some time to understand and even more so to set up. Even after set up, they take constant monitoring and adjusting. These are 3 ways to get the most of Facebook ads.

Facebook is different from all the other ad services available. Facebook allows you to hyper-target your audience. Want to target 27-year-olds who live in Chicago and like the French National rugby team? Facebook can let you do just that with Saved audiences. 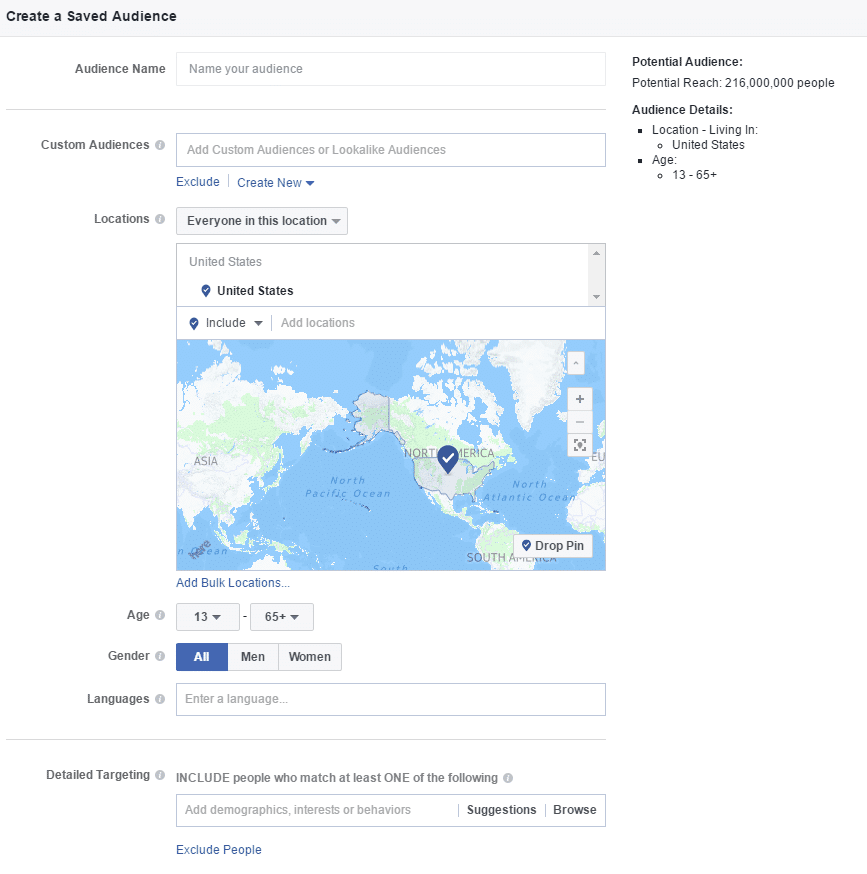 This is where you create the audience you want to target. You name the audience, choose the location, age, gender, languages, and detailed targeting.

The location section can be narrowed down to a zip code and mile radius or be as wide as the entire world. You can also exclude locations. So if there are locations that you don’t service or locations where your products don’t reach, you can exclude them. That way your advertising money isn’t being wasted in areas where there won’t be any conversions or leads. The age section ranges from 13-65+ as shown in the screenshot. The language section is where you decide what language speakers you want to target. English, Spanish, French, German, etc. most if not all languages are available for selection. Then there’s the detailed targeting section. If you’re wanting to make a very hyper-targeted audience, this will take some time, more than 10 minutes for sure. Research has to go into making the right audience or else all your advertising budget will be for naught.

Let’s take a closer look at the Detailed Targeting section.

Here you can include certain demographics, interests, or behaviors that you want to target. Then you can exclude certain demographics, interests, or behaviors that have nothing to do with your audience. So you want to reach the 27 year-olds that live in Chicago and like the French National rugby team? This is the section to do it in.

The first screenshot shows what the audience looks like with Facebook’s pre-filled specifics. What’s pre-filled is the location which in this case is the U.S. and the age range from 13-65+. 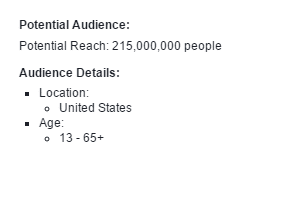 As you can see the potential reach is 215 million Facebook users. Now take the example of the 27 year-olds in Chicago. We put in the demographics and interests and the potential reach is narrowed down to 20! Your ad will only hit those 20 people. Considering it is such a specific group, they might be very enthusiastic about the French rugby team and will be more likely to click on the ad.

Now let’s say you don’t want someone of those 20 people to also be a fan of another team. You can add that to the exclude section. It doesn’t have to pertain just to rugby, it can be income, education, and anything else.

Facebook rates your ads. This means it decides who gets to see them and how they are delivered. They’ll only show the ads to the people that will matter to them. The relevance score ranges from 1-10 with 10 being the highest.

How does this score get calculated? It’s calculated based on the positive and negative feedback they expect an ad to receive from its target audience. So the more positive feedback, interactions the ad gets, the higher the relevance score. The relevance score is lowered by negative interactions and the number of times the ad is chosen to be hidden by users or reported. The score matters because it can lower the cost of reaching people. It can also optimize your already running campaign. If the score is dropping during the campaign, then it is time to change the ad and/or adjust the audience target. Improve your score by refreshing the ad image. The initial audience will have gotten bored of the ad. 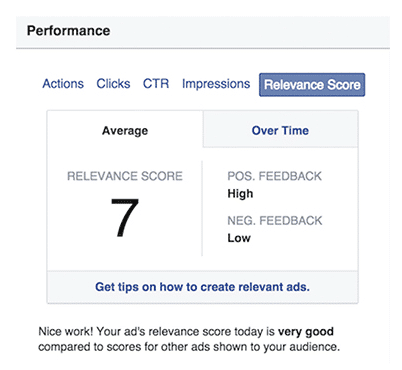 Constant monitoring and adjusting are key to have the best performing ad for your campaign. But it’s important to know it’s not the only thing that matters. It helps you learn about your audience and it’s a way to test what works and what doesn’t.

Facebook has two options when it comes to bidding. Automatic bidding (done by Facebook) or Manual bidding which you decide. Facebook has an advanced model that allows you to set your own CPM (cost per thousand impressions) bids. It also allows you to switch over to CPC (cost per click) pricing. Facebook is giving you the option to do your own bidding. Take advantage of that. As shown in the screenshot below, you decide what a click is worth to you. Facebook won’t charge more than what you set so you don’t have to worry about Facebook over using your daily budget. There are also different options for when your Facebook ads run and how they’re delivered. 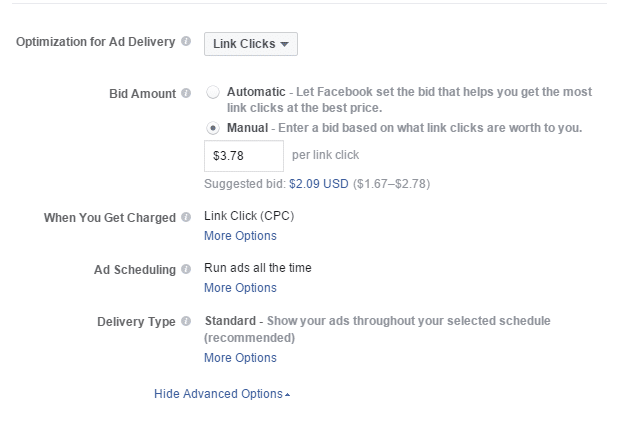 Ad Placement! Make sure you know where they are showing up! If you want Facebook only, make sure to choose that option. There is the option for Facebook, Instagram, and Audience Network. You don’t want your ad budget going to places where you have no customers or no real leads.